Wardley Hall is the official residence of the Roman Catholic Bishop of Salford, which stands in a wooded estate in Worsley, six miles west of Manchester. The Hall has been home to the Bishop of Salford since 1930 when it was gifted to the diocese, after it purchased the surrounding land for a new Catholic cemetery.

You can find out more about the story of Wardley Hall by extending the drop down menu below.

Wardley Hall through the years

The present Hall, built by Thurstan Tyldesley, during the reign of King Edward VI (1547–1553), stands on the site of a house dating from the year 1300. The house remained in the Tyldesley family until the late 1500s. 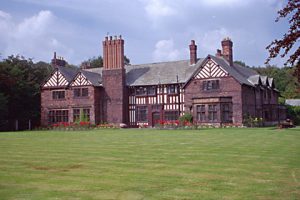 In the 1760 Francis, the third Duke of Bridgewater, known as the “Canal Maker”, bought Wardley and other estates in Worsley, Barton, Monton, Hindley, Westhoughton and Pemberton.

He died in 1803 and in his will left, in trust, part of the estates to his nephew the Marquis of Stafford and the remainder to the Marquis’ second son, Francis Leveson-Gore. He was created the first Earl of Ellesmere in 1846 and died in 1857. He was succeeded by his son George Granville Francis, who died only five years later in 1862. The third Earl was his son, Francis Charles Granville, who became owner of the Worsley part of the estates when the Bridgewater Trust closed in 1903 – exactly a hundred years after its creation.

In the meantime, the occupants of Wardley Hall had suffered changing fortunes and were guilty of acts of vandalism which, fortunately, were not as bad as those at many other ancient Halls. The Main Hall was divided to create smaller rooms and the ceiling was reduced by the addition of an upper floor, thus forming what is now known as the Upper Hall.

In 1894 a team of restorers carried out a cleaning-up programme. The east wing was, at this time, being used as cottages, stables, coal-house and workers’ rooms, but in 1903 the then Earl of Ellesmere had these removed to the nearby farmhouse.

In 1919 or 1920, Captain Thomas Nuttall, while still serving with the Royal Field Artillery in Germany, took over the tenancy of the Hall and in 1924 bought the Hall and estate for the sum of £5,000. However, he decided to move when the plans for the new East Lancashire Road, linking Manchester with Liverpool, showed that this pioneer motorway would cut through the estate.

At that time the official residence of the Bishop of Salford was a large mansion – Fairways – in Chatsworth Road, Worsley, overlooking the Worsley Golf Course.

When Captain Nuttall first offered the Hall and grounds to the Roman Catholics in 1928, it was felt that the finances of the diocese could not support such a transaction, but, when in 1929, it became know that the diocese was looking to buy land on the west side of Manchester for use as a cemetery, Captain Nuttall’s representatives reopened the negotiations.

Eventually, on 12th May 1930, the deal was completed, the diocese agreed to pay a price of £7,500 for the purchase of the land for the cemetery, and Captain Nuttall offered the hall and its surrounding land to the Diocese as a gift, on condition that it be maintained in keeping with its ancient and venerable state.

Since that time until the present day the Hall has been used as the residence for the bishops of the Diocese.

Until fairly recent times (probably around the turn of the last century) the Hall was surrounded by a moat, and entrance to the building was effected by means of a drawbridge (later a fixed bridge) in front of the Gatehouse on the north side; nowadays there is only about half the original moat remaining on the south and west, with spacious lawns and kitchen gardens on the east, and an attractive driveway and entrance to the north.

The Hall itself is rectangular, four wings surrounding an inner cobbled courtyard. In 1561 Thurstan Tyldesley was granted a licence for an oratory, and a private chapel was built inside the Gatehouse on the north side of the house.

Read about all former Bishops of the Diocese of Salford

The story of the Skull

For more than two centuries Wardley Hall has been known as the ‘House of the Skull’; there have been two theories concerning the origin of the skull, which is kept in a niche at the side of the main staircase.

One theory was that it was the skull of Roger Downes, who was buried 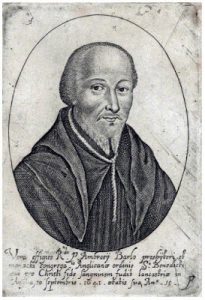 in the family vault in Wigan at the early age of 28. He was described as “one of the wildest blades at Court and an undoubtedly vicious character” who, legend has it, was decapitated in a drunken brawl in Epsom Wells. (This Roger is not to be confused with his ancestor Roger Downes the Elder, mentioned above, who was of very good character!)

The same legend added that his skull was sent to his sister at Wardley.

However, this story has been rejected by most experts and was disproved about a century after his death when the vault was opened and his skeleton found to be intact, apart from the upper portion of the skull which had been sawn off above the eyes, apparently for some form of post-mortem investigations to ascertain the cause of his death.

The most expert historical opinions favour the second theory – that it is the skull of St Ambrose Barlow, the fourth son of Sir Alexander Barlow, of Barlow Hall in Didsbury, and who was related to the Downes family.

Who was Ambrose Barlow?

Edward Barlow – he took the name Ambrose on becoming a Benedictine monk – was born in Manchester in 1585. Wishing to study for the Roman Catholic priesthood, but unable to do so in this country because of religious persecution, he went first to Seminary at Douay in France and then the English College at Valladolid in Spain where he was ordained priest, before returning to England in 1615 to minister to those who still kept the faith in the area between Manchester and Liverpool.

Noted for his saintliness and humility, Ambrose carried out his duties on foot, his two main Mass Centres being Wardley Hall and Morleys Hall in the parish of Leigh. While he was recovering from a severe illness, he celebrated Holy Mass on Easter Sunday, 1641, in Morleys Hall for about 200 of the faithful, when a local clergyman “an ardent protestant”, some say the Vicar of Eccles, while others say the Vicar of Leigh, heard of Ambrose’s presence and led a mob of 400 people to apprehend the “Popish Priest”.

Ambrose was warned of their approach but refused to abandon his people. He was arrested and taken to Lancaster Castle escorted by a posse of 60 men. After four months in Lancaster Gaol he was brought to trial on Tuesday, 7th September 1641. He was accused of being a Catholic priest “and at no time denied the charge”. After two days he was found guilty and condemned to be hanged, drawn, and quartered. The following day – 10th September – the sentence was carried out; he was placed on a hurdle and drawn to the place of execution carrying a small wooden cross, which he had made while languishing in prison.

After Ambrose had been martyred, his head was severed from his body, and sent to Manchester on the orders of the magistrate, to be displayed as a warning to others who still would not conform to the new protestant heresy. However, a relation of Ambrose, Francis Downes, “a staunch Catholic”, rescued the skull, by night, and guarded it in a secret place in Wardley Hall, where it rested undisturbed for many years.

The skull is rediscovered

In 1745, Wardley Hall and its adjacent lands were held on a life-lease, from Lady Penelope of Cholmondley, by Matthew Moreton, who, after Charles Stuart’s (known by some as the Young Pretender) defeat, fell on hard times and decided to pull down a ruinous part of the building to install hand looms for weaving. Moreton had become impoverished after the sacking of Wardley Hall by Bonny Prince Charlie’s troops. Although there is no known written record for this, oral tradition tells that the troops encamped in a field nearby (which became known locally as “the rebels’ field”), given the artefacts such as cannon balls later discovered there. The troops ransacked the Hall before continuing their retreat along the Preston Road – now the A6 running at the top of Wardley Hall Lane.

While the work of demolition was being carried out on the Hall, a wall from the original chapel was taken down and a casket discovered, containing a skull “furnished with a goodly set of teeth and having on it a good deal of auburn hair”.

Ambrose is reputed to have had auburn hair. However, this does not prove that the skull is that of Saint Ambrose Barlow – canonised by Pope Paul VI on 25th October 1970 – nor does it prove that it is not.

However, the following points should always be respected:

Since the arrival of Bishop John at Wardley Hall, the house has undertaken a number of renovations and is now a place which welcomes thousands of parishioners from across the diocese each year.

Opening Wardley Hall up to the public has brought a new lease of life to a Hall with a rich and diverse history.

Since 2016 and the Year of Mercy, Wardley Hall has been a place of retreat for parishioners from across the Diocese. Groups and individuals have been welcomed to the Hall to take part in retreats run by volunteers.

The Laudato Si Centre is an exciting project at Wardley Hall which aims to make the Diocese of Salford a flagship for effective action on climate change.

It is an ambitious project which will take about 3-5 years to be fully realised, but it is hoped that the Centre will create a space for all to learn how they can take practical action to tackle climate change and will help to work towards a sustainable world for future generations.

In time, the Laudato Si Centre will welcome members of the public and we hope that the introduction of the centre will inspire the local community, schools and parishes to transfer some of the ideas on display into their own communities.

As well as being a place of retreat, Wardley Hall has welcomed hundreds of schoolchildren to its grounds over the last few years. They have taken part in tours, reflections and been awarded prizes at the Hall, making it a special place to schools across the diocese.

Wardley Hall is also used as a meeting place for clergy, groups and parishioners across the diocese.