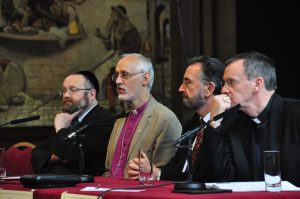 Interfaith in the diocese

Previously the area of dialogue, which encompassed ecumenism and inter-religious dialogue, was part of the Department for Evangelisation.

The move to establish a Department of Dialogue has enabled us to build on the good work previously undertaken.

Over the last few years there have been ongoing relationships with the Islamic Community; continued sharing at the Council of Christians and Jews (CCJ); meetings with the Information Department of the Israeli Embassy and also meetings with the Foreign Minister for Inter-Religious Affairs in the Pakistan Government. We have responded to requests from Ummah TV, Blackburn, for a Catholic presence and have had invitations from Mosques to break the fast at Ramadan.

The Department has been approached by local groups to make contact with Ecumenical bodies and we have accepted invitations for Dialogue with Together Lancashire. This is a joint venture between Anglicans and Methodists who are seeking to work ecumenically on local projects regarding social action, who have extended an invitation to have a Catholic observer on their committee.

We have been represented at a number of conferences on Inter-religious Dialogue, engaging with Islam and on the work of Churches Together in Britain.

We have been able to deal with various requests from different religious groups and have established an office.

It is with great gratitude that the Department has been able to respond to every request to listen or share.

Future Aims of the Department

We hope we can continue to be involved in Citizens UK Project. This has people working together for their local community and encourages a greater understanding between people of different faiths, religions and backgrounds as they work. 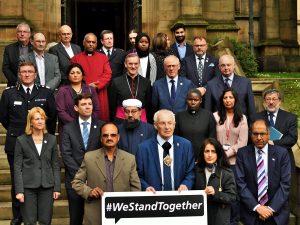 We will make contact with members of other religions within the Diocese, for examples the Sikh and Buddhist communities.

We aim to build on the expertise within the Department and incorporate the gifts and talents of others within the Diocese as the opportunities present themselves.

We do all of this in faith and with the continued desire to build up cohesive and welcoming communities.

“Dialogue is a principle task of our time and the church must enter into dialogue with the world in which it lives.  It has something to say, a message to give, a communication to make” Paul VI Encyclical ‘Ecclesiam Suam’