“The restoration of unity among all Christians is one of the principle concerns of the Second Vatican Council.”

“Today, in many parts of the world, under the inspiring grace of the Holy Spirit, many efforts are being made in prayer, word and action to attain the fullness of unity which Jesus Christ desires. The Sacred Council exhorts all the Catholic faithful to recognise the signs of the times and to take an active and intelligent part in the work of ecumenism.”

Why is Ecumenism important?

These quotes from the Decree on Ecumenism (“Unitatis Redintegratio”), shared 21st November 1964, remind and encourage Catholics to take part in ecumenical dialogue and so develop stronger relationships with those of other Christian Churches and ecclesial communities. By recognising that which unites us and discussing honestly our differences, we reach a deeper understanding and respect, which surly benefits the whole of humanity. Such dialogue results in greater understanding and mutual respect; respect which open up the way to new initiatives. The encouragement, which has sprung forth from the Decree, has led to great changes over the past fifty or so years.

It fair to say that successive Popes have sought to promote by word and example the principles laid down in the Decree on Ecumenism. 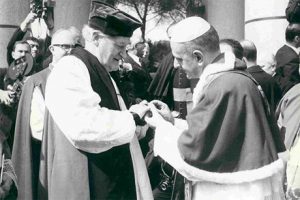 We have witnessed the meeting between Pope Paul VI and Archbishop Ramsey at St. Paul’s Outside the Walls in Rome on 24th March 1966 and The Common Declaration:

“The Pope and His Grace the Archbishop of Canterbury are, indeed, aware that serious obstacles stand in the way of a restoration of complete communion of faith and sacramental life; nevertheless, they are of one mind in their determination to promote responsible contacts between their Communions those spheres of Church life where collaboration is likely to lead to greater understanding and a deeper charity, and to strive in common to find solutions for all the great problems that face those who believe in Christ in the world of today.”

During the pontificate of Pope Saint John Paul II he recognised the importance of ecumenical and inter-religious dialogue and was clear in his believe that the conversations and sharing mentioned in the 1966 Common Declaration continue thus leading to greater understanding, which itself encourages the work and prayer for greater unity. So it is not surprising that on the second day of his pastoral visit to Britain, 29th May 1982, Pope John Paul visited Canterbury Cathedral thus showing the importance of Ecumenical relations. 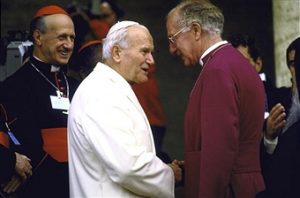 These words of the Pope show this to be so:

“Once more then we call on bishops, clergy and faithful people of both our Communions in every country, diocese and parish in which our faithful live side by side. We urge them all to pray for this work and to adopt every possible means of furthering it through their collaboration in deepening their allegiance to Christ and in witnessing to him before the world. Only by such collaboration and prayer can the memory of past enmities be healed and our past antagonisms overcome.”

In 1995 Pope Saint John Paul II wrote the Encyclical “Ut unum Sint” which focused on the commitment to Ecumenism:

“The entire life of Christians is marked by a concern for ecumenism; and they are called to let themselves be shaped, as it were, by that Concern.” 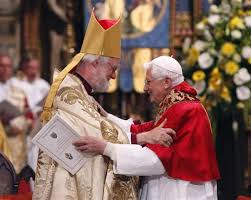 “I come here today as a Pilgrim from Rome, to pray before the tomb of St. Edward the Confessor and to join you in imploring the gift of Christian Unity.”

“ This year, as we know, marks the hundredth anniversary of the modern ecumenical movement, which began with the Edinburgh Conference’s appeal for Christian Unity as the prerequisite for a credible and convincing witness to the Gospel in our time. In commemorating this anniversary, we must give thanks for the remarkable progress made towards this noble goal through the efforts of committed Christians of every denomination. At this same time, however, we remain conscious of how much yet remains to be done.”

As Pope Benedict mentions the Edinburgh Missionary Conference of 1910, it is worth noting that while the Catholic Church was not represented at this gathering, there was a Catholic contribution made in the form of a letter sent by the Italian Archbishop Bonomelli of Cremona. He sent a letter in response to a request made of him and it was read at the beginning of the meeting.

“May truth be as a shining light, illuminating your conscience and making you all of one heart and one mind. My desire for you is but the echo of Christ’s words which resound through the Centuries, ‘let there be one flock and one shepherd’.”

Churches Together in England

One of the greatest gifts or fruits of the giant strides in ecumenism is Churches Together in England.

This website contain all the links to documents and reflections and is essential for those working in the area of ecumenical dialogue.

Central to this is the Swanwick Declaration of 1987, or in Churches Together in Pilgrimage( the Marigold Book)

Member Churches are listed on the Website, there you will see that the Bishop’s Conference of England and Wales have been members since 1990 and were indeed founding members. There are 44 member Churches, 2,600 local groups 49 Intermediate groups and 900 local partnerships. Churches Together in England have six president, and Cardinal Nichols is one of the presidents. The meetings of this group are regular and they are facilitated by David Cornick who is General Secretary.

Membership of Churches Together in England is based on denominations with a National presence.

Local Churches may join local or county level Churches Together Groups but this does not give a congregation membership of CTE.

Member of CTE are expected and entitled to:

Churches Together in England – Statement of Belief

“Churches Together in England unites in pilgrimage those Churches in England which, acknowledging God’s revelation in Christ, confess the Lord Jesus Christ as God and saviour according to the Scriptures, and in obedience to God’s will and in the power of the Holy Spirit commit themselves:

To the glory of the one God, Father, Son and Holy Spirit.

“Greater Manchester Churches Together is the intermediate Body set up by it’s member denominations and it’s ecumenical partners to facilitate common witness, the search for Christian unity and better cooperation.”

Bishop John is one of the sixteen presidents of Greater Manchester Churches Together.

Churches Together In Lancashire 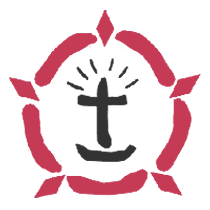 Who we are and what we do