Islam, like Christianity, with its several denominations and sects, has its schools of thought and its religious movements. Most people will have heard of the Sunnis and the Shias. The Sunnis form about 85% of the world’s Muslims. They give primacy to the Qur’an and to the established Sunnah. The Shias give primacy to these same sources, but they are also guided by the teachings of the Prophet Muhammad’s descendants, in particular those of his son-in-law and cousin, Ali. The Shias can be divided into three main groups, the Zaidis, the Ishmaelis and the Ithna Asharis, the last of these being the largest. But you may also have heard, with regard to the Sunni Muslims, of the Barelwi, Deobundi or Wahabi schools of thought. Whereas some Christian denominations have hierarchy, which can rule on orthodoxy, Islam has the Ulama (scholars) and the Mufti who can issue “Fatwa” (rulings made after a study of the Qur’an and the established Sunnah and Hadiths and the statements of other Ulama).

The vast majority of Mosque and Madrassa communities are happy to build good relations with their Christian neighbours. There is a tendency amongst Western writers on Islam to suggest that some Islamic schools of thought are problematic. Most often mentioned amongst these are Wahabi / Salafi / Ahl al-Hadith. But it would be wrong simply to avoid a Mosque community because it was of that school of thought. There are examples of Mosque communities from these traditions also building good relations with their Christian neighbours.

However, there are movements, like Hizb ut-Tahrir, Al Qaeda and Daesh, which are problematic.  Hizb ut-Tahrir, formed initially by Al-Nabhani in 1953, are clear in their desire to re-establish a caliphate, they justify the killing of apostates from Islam and they claim that the State of Israel is an illegal entity. They do have some followers in the United Kingdom and, unlike in several other countries, have not been banned here. There has been some considerable resentment amongst the other Muslim communities that the Media have given too much opportunity to members of Hizb ut-Tahrir to express their opinions as if they were representative of the whole Muslim community. And, indeed, the vast majority of the Muslim population of this country disagree with and condemn the ideology of all three groups.

A further group, the Ahmadis, would claim to be Muslim, but this is a claim that is rejected by all Sunni and Shia Muslims, who regard the Ahmadis as heretics. The State of Pakistan, for example, declared the Ahmadis as a non-Muslim minority in 1974 and Saudi Arabia officially bans them from taking part in the pilgrimage to Mecca. The antipathy towards the Ahmadis is partly because of their regarding their founder, Mirza Ghulam Ahmed, as a Messiah and Prophet.

Building relationships with a local Mosque community so as to understand Islam. 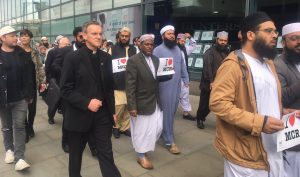 One of the first steps to build relationships with a local mosque community could be to attend existing interfaith meetings, where these have been established. From getting to know individual mosque members, it’s easy to organise a visit to the Mosque either for an individual or for a group of people. Once a contact of this nature has happened, a reciprocal visit is an obvious next step and a relationship has begun.

However, there are still many places where interfaith groups do not already exist. There are several Mosque communities which organise open days for their local communities (Muslim or Non-Muslim). These are usually advertised in the local Press. But many Christians will already know individuals who attend Mosque on a regular basis. To organise a visit through one of these individuals would perhaps create the greatest opportunities.

Learning to understand Islam can be a little like learning a new language; it takes time. There are, for example, so many Arabic words used in common parlance. Just as when you learn another language you learn best by immersing yourself into the culture without losing your own identity. One way to dip your toe into Muslim culture could be to share, for at least one day, the Muslim fast of Ramadan, albeit from a Christian perspective. Again, through individual contacts with Muslims or through “Share Ramadan” (Just Google it!), you could mention to a Muslim neighbour that you were thinking of fasting from sunrise to sunset. This might elicit an invitation to share an Iftar (the breaking of the fast). To fast for a day, in this way, would give a real insight into what it’s like for the Muslim communities during Ramadan and it would be a sign of an extended hand of friendship.

Building relationships is also a little like building a bridge; your foundations have got to be deep and firm on both banks. A relationship is always much healthier when both parties to the relationship have a good sense of who they are and good self-esteem.