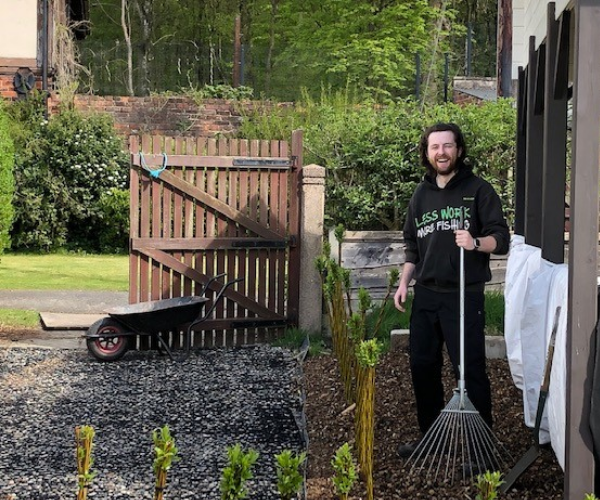 This Volunteers’ Week we are celebrating a volunteer who dedicated a week of his time to working at the Laudato Si Centre, based at Wardley Hall, who has made a huge difference after joining forces with his Nan to put their faith into action.

Ben Whalley, from Salford recently graduated in Environmental Science from the Manchester Metropolitan University, and began volunteering for the Laudato Si Centre in April.

During the week, Ben completed a variety of tasks including:

Ben is now passing on the baton to his Nan, Maureen, who has decided to get involved as the Laudato Si Centre’s first ‘Honey Representative’.

So far, Maureen has sold £77 worth of honey with £4 going to CAFOD’s World Gift ‘Happy Queen Bee’ and £3 to bee hive running costs to enable the project to be self-funding.

Maureen recently lost her husband, Alan – who is buried in the neighbouring cemetery. She visits Alan 3-4 times a week and called in whilst Ben has been volunteering, and was inspired to get involved herself.

In time, Maureen will also be volunteering in the Walled Garden – sowing and growing on herbs for the forest garden.

Could you be our next Laudato Si volunteer on a long or short term basis? Click here to download a role description

Pandemic Stories of Hope in the Future

Walk, dance, row the Miles that Matter this Refugee Week