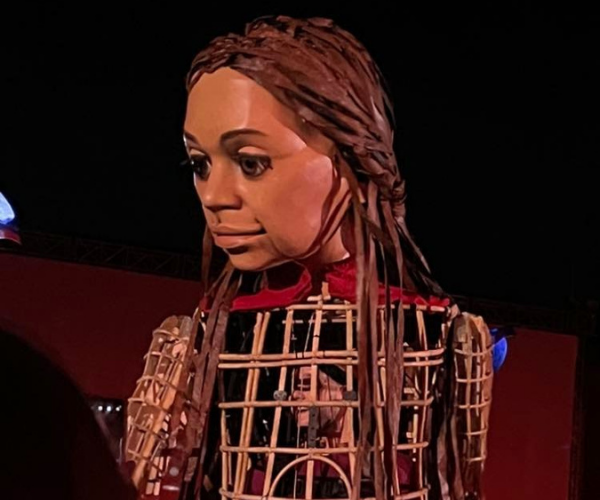 After an epic 8,000km journey that took in the sights and sounds of Europe, we were delighted to welcome Little Amal at her journey’s end in Manchester this week.

Amal – a name which “Hope” in Arabic – is a 3.5-metre-high puppet representing a nine-year old girl from Syria.

Like millions of people around the world, Amal was forced to flee her home through no fault of her own, to escape a set of compounding problems such as war, poverty, and the effects of climate change.

Having become separated from her family, Little Amal begun her journey to safety in July; leaving the Turkish-Syrian border to embark on a four-month trek across Europe, visiting 65 cities, towns, and villages, meeting artists, civic and religious leaders – including Pope Francis – before arriving at her final destination in Manchester this week.

Thousands of people, including charities that work to support refugees such as Caritas Diocese of Salford, took to the streets to catch a glimpse of the stunning puppet, created by the Handspring Puppet Company, as she made her way to Castlefield Bowl to the accompaniment of music, dance, and poetry, organised by the Manchester International Festival.

There, she was greeted by cheering crowds shouting, “Welcome Amal!”, and danced along to further performances before showing crowds a glimpse of a brighter future as she made friends with a group of children over a game of football. 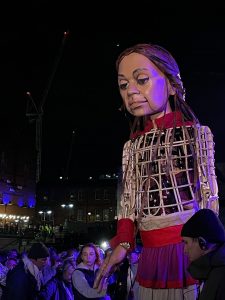 Sandra Burgess, headteacher at St Teresa of Avila Roman Catholic Primary School in Irlam, attended the event with Caritas Diocese of Salford, and said: “Watching Little Amal, a young child, enter so many different countries unsure of her welcome and all alone, it just made me have so much more empathy for the children who are refugees currently in our communities and schools.

“Being part of her arrival in Manchester was really moving and it reaffirmed our responsibility to welcome refugees with all the love and compassion that we can.”

For Little Amal, her journey is over, but for millions of other people, their struggles have not even begun.

Figures from the UNHCR reveal that at least 82.4 million people around the world have been forced to flee their homes, 26.4 million of whom are refugees. Approximately half of these are under the age of 18.

With war, violence, and poverty ravaging numerous parts of the world, and an escalating environmental emergency presenting further risk, this number is set to climb.

According to the Institute for Economics and Peace, 1.2 billion people across the world could be displaced by climate-related events by 2050.

She said: “This might be a creative thing we are doing here but there are millions of people, millions of children, and millions of families who, like Amal, have to walk thousands of miles to start a new life away from their homes through no fault of their own.

“This is not Amal’s fault. No-one walks halfway across the world to safety unless they are desperate.

“We are so proud to welcome her here tonight.”

Thanks to the work of charities and organisations around the world, there are plenty of ways we can welcome people like Amal into our communities.

Here in our diocese, we are honoured to work with a number of different organisations from different faiths to offer a hand of friendship to refugees and asylum seekers.

Caritas Diocese of Salford has long been undertaking fantastic work to support people arriving in Lancashire and Greater Manchester after undertaking their own treacherous journeys – often without the same understanding and support that Little Amal received on the way.

Just last month, volunteers from the Parish of St Mary and St Gerard’s in Bamber Bridge became the latest parish to welcome a refugee family as part of Caritas’ Community Sponsorship Programme, which aims to support refugee families as they settle into their new homes.

A number of parishes across the diocese have taken part in the initiative; the first being St Monica’s in Flixton, which became the first parish in the UK to host a family through the programme.

Offering ongoing resettlement support, education opportunities, and emergency response to events such as the recent Afghanistan crisis, Caritas provides a lifeline for people fleeing danger like Little Amal. But it also offers more than just practical support: it offers friendship.

Professor Bell said: “We need to make sure we welcome people with love, not tolerance. Love. I don’t just want to be tolerated.”

This concept of love in action is the very meaning of the word Caritas, a notion that is at the epicentre of our Christian faith.

Pope Francis regularly reminds us of this as he repeatedly urges us to “welcome the stranger”, and it is the humanitarian work of charities like Caritas and the environmental efforts in our diocese that paves the way for a future of hope for millions of people like Amal.

We hope and pray that the outpouring of love and friendship shown to Little Amal may be extended to all refugees and asylum seekers as they search for a new life of safety, dignity, and hope. 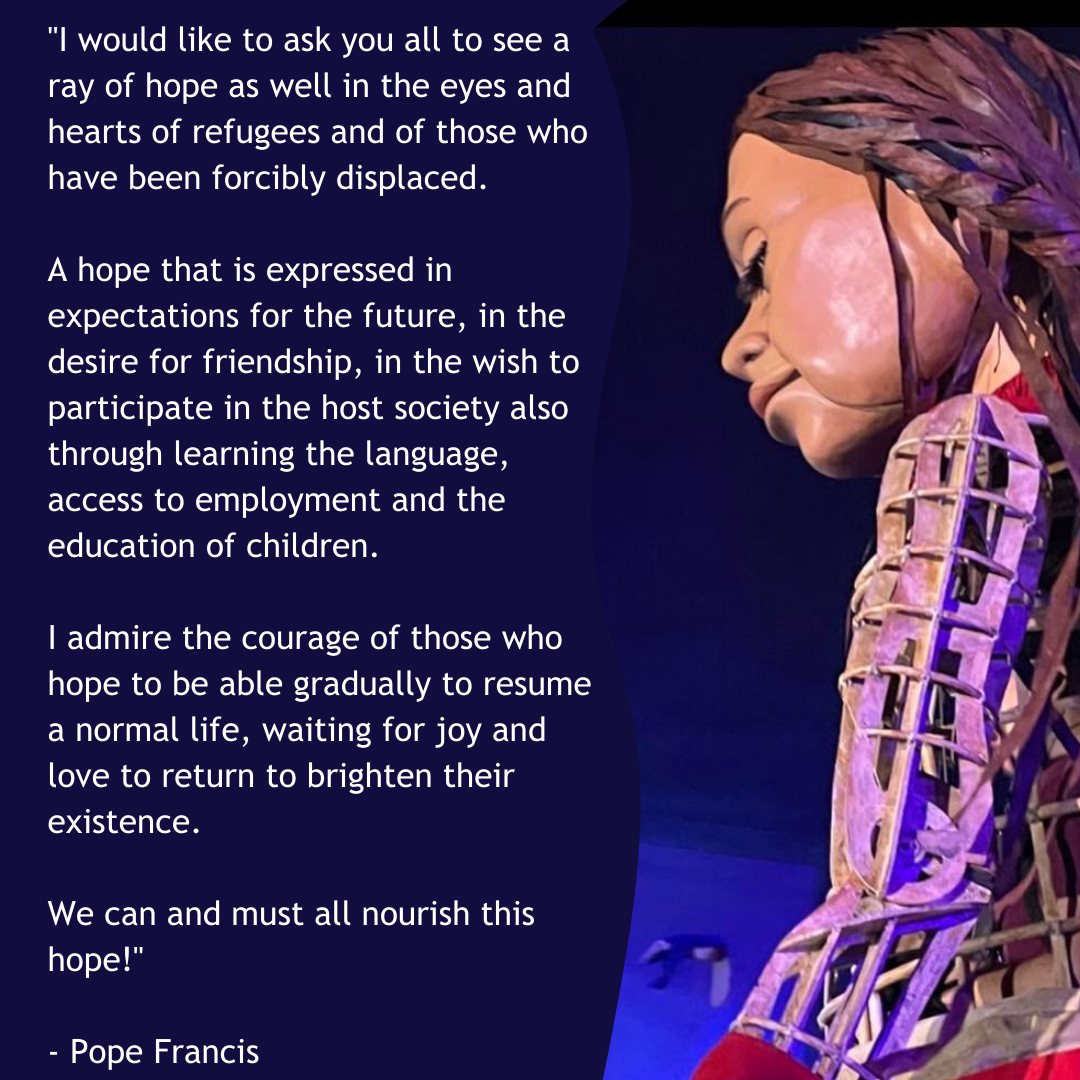 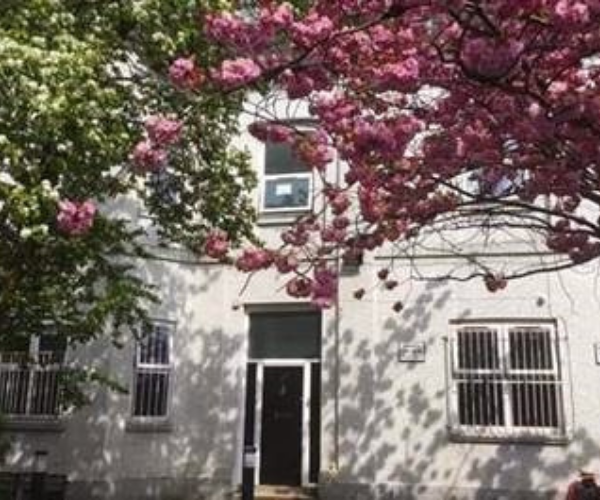 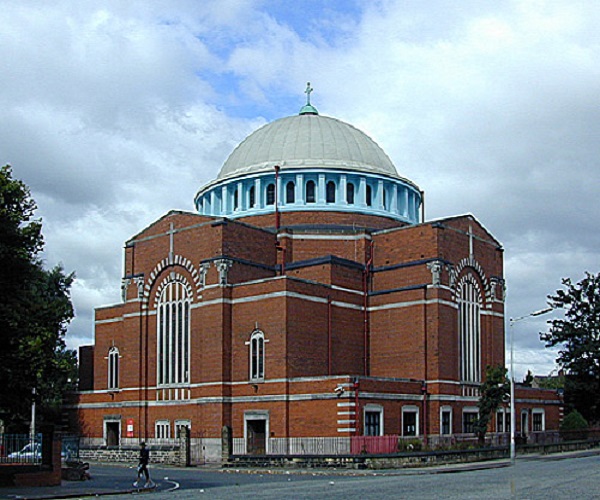 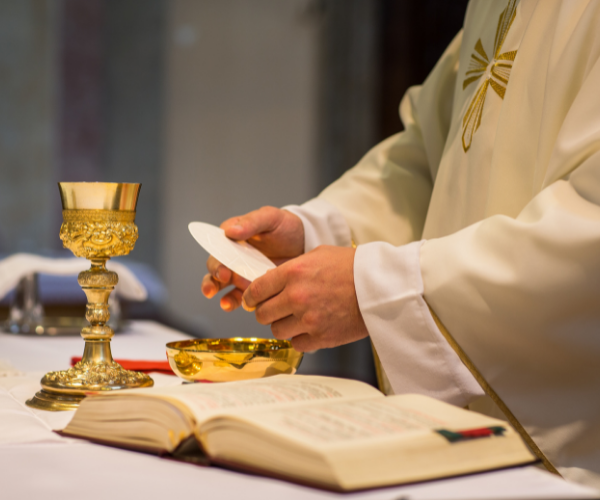